There are some who claim that Roger uses a racquet with an 88-square-inch head size, as opposed to a 90-square-inch head size. The implication is that the retail version is actually 90 square inches, but that Wilson has completely separate molds for Roger’s racquets, so that his racquets are a bit smaller than the racquets the average consumer can buy.

I therefore also attempted to measure the head size of Roger’s racquet. My procedure was to get a digital image of the racquet, use image analysis to determine the number of pixels inside the hoop, and convert this to square inches.

I ran into two difficulties: First, for some reason the X and Y dimensions in the digital images did not have the same mapping to actual measurements of the racquet. Second, it is extremely difficult to be precise when erasing unwanted background from the inside of the hoop. Therefore, there may be some error in my calculations. I toyed with the idea of mounting and lighting the racquet in such a way that the digital camera image would be easier to manipulate, however, this would still leave the parallax error. If I get excited about this project again in the future, I will mount and light the racquet differently, and use my 600 mm telephoto lens to mitigate the parallax error.

However, I also evaluated the hoop size of a retail K Six.One Tour 90, and came out with almost identical results. Based on these results, it seems that there is no difference in the mold used to make the retail versions of the “Federer” racquet.

Just so that everyone understands how little difference there is between these racquets, I refer you to the image below, which I generated using Adobe Illustrator. 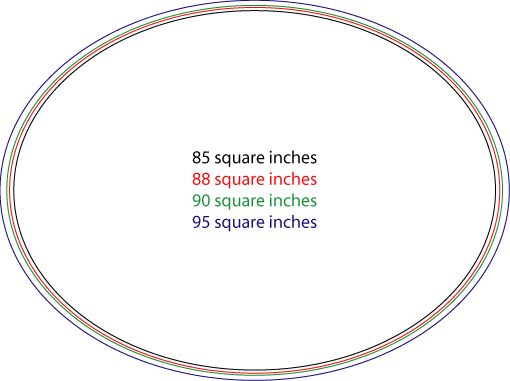 Although this hoop shape is idealized, you can see that there is very little difference among these four head sizes, with an especially small difference between the 88- and 90-square-inch head sizes.